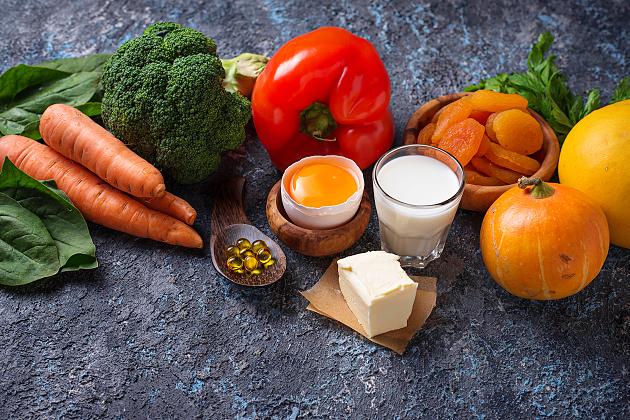 Vitamin A is a generic term for several vital substances, including beta-carotene. A deficiency is rare, but there are risk groups, for example with liver or intestinal diseases. The signs of A-deficiency, how to avoid it and how dangerous an overdose can be.

Carrots are high in vitamin A and beta carotene, hence their name, and are important for the eyes and the immune system. Most of them do not know more about these vital substances – and this statement is sometimes even incorrect.

Vitamin A, provitamin A and beta carotene – what are they?

Because vitamin A is a complex of vitamins that includes retinol and retinyl esters . These forms are mainly found in animal foods.

There is also provitamin A as a precursor, which is found in plant-based foods. “There are also various representatives of provitamin A, the best known is beta carotene,” explains Andrea Henze, nutritionist at the University of Potsdam. The body has to convert provitamin A such as beta carotene into vitamin A so that it can be used. This processing takes place mainly in the intestines and liver.

Beta carotene – like all provitamins A – in turn belongs to the large group of carotenoids, of which there are more than 600 different ones. All of them have the property, as a natural coloring agent, of coloring plants yellow, orange, red and are therefore found in many orange-red vegetables. “But green vegetables such as spinach can also contain a lot of carotenoids,” adds the scientist, who is also researching the subject of vitamin A. In green vegetables, however, the orange-red color of the carotenoids is masked by the green plant substance chlorophyll.

The function of vitamin A.

Vitamin A is vital. “We need vitamin A for almost all body functions because it enables cells to differentiate,” explains Andrea Henze. This means that under the influence of this vital substance, the cell can become a skin cell, a mucous membrane or nerve cell. The other functions of vitamin A:

Vitamin A does not have an antioxidant effect

From a purely chemical point of view, vitamin A is an antioxidant, but it does not play a role in the body in this context, for example because of its binding to transport proteins and its intracellular localization. As is often assumed, it is not a radical catcher and does not protect against “cell rust”, i.e. oxidation. “Vitamin A has no direct effect in this context, only an indirect one,” explains Andrea Henze more precisely: Vitamin A increases the absorption of vitamin E and selenium in the intestine, which have an antioxidant effect.

Pro-vitamins A such as beta carotene, on the other hand, can develop an antioxidant effect in the body before they are converted into vitamin A.

Why is this distinction important? Andrea Henze explains why it is best to use both animal and vegetable sources of vitamin A: Only then can the full spectrum of activity of these vital substances be used to the full.

Foods that are high in vitamin A and beta carotene

Among the foods of animal origin, the following are particularly rich in vitamin A:

When it comes to plant-based fruits and vegetables, these are good provitamin A suppliers:

Store and prepare foods rich in vitamin A correctly

Vitamin A is sensitive to light, so food should be stored in the dark. In addition, the vital substance is relatively heat-stable and fat-soluble. This means that it is bound to fat and can therefore best be absorbed by the body.

In the case of animal sources, this is usually given or due to the preparation, for example the extremely low-fat liver is fried in oil. For the preliminary stage vitamin A, however, the corresponding vegetables should be prepared together with fat. “Studies have shown that it is particularly well absorbed by the body when it is crushed and steamed with a little fat,” reports Andrea Henze. Grinding is important so that the provitamin is released from the cellular structures.

An example: carrot vegetables, chopped up and steamed with a little safflower oil, provide the body with the vitamin better than nibbling raw carrots.

This is how much vitamin A you need every day

According to the reference value of the German Nutrition Society, the daily requirement for vitamin A is around one milligram per day. However, this is a bit simplified. Other units are used in nutritional science, the requirement is given as so-called retinol equivalents (RE) or retinol activity equivalents (RAE), explains the scientist and explains in more detail. 1 milligram of retinol corresponds to 1 milligram of RE or RAE. For provitamin A carotenoids, the calculation is more complex because additional factors have to be taken into account:

When using RAE, a conversion factor of 12: 1 is assumed for beta carotene and 24: 1 for all other provitamin A carotenoids. This means that 12 milligrams of beta carotene or 24 milligrams of other provitamin A carotenoids must be ingested with food to meet the requirement of 1 milligram of RAE. If, on the other hand, the intake takes place in the form of retinol or retinyl esters (i.e. from animal foods), the required intake is correspondingly lower.

Because these foods are so rich in vitamin A, there is virtually no deficiency in this vital substance in Germany and other industrialized nations. However, that’s only true at first glance. Because experts differentiate between primary deficiency and secondary causes when it comes to undersupply.

Primary means that too few foods rich in vitamin A are eaten. This is almost never the case in this country. Even those who only eat fast food are adequately supplied with vitamin A. Vegans and vegetarians also get enough vitamin A from the preliminary stage.

It is different, however, with a secondary deficiency. In this context, secondary is used when the deficiency arises as a result of illnesses. Digestive diseases that affect absorption, such as:

In addition, there is a risk of undersupply if the vitamin A requirement is increased, this is the case with:

Vitamin A Deficiency: Symptoms can be dramatic

As a rule, these risk groups are well looked after by a doctor, so that symptoms of deficiency rarely occur. Exception: alcoholics and very overweight people with massive fatty liver who do not seek medical advice. Apart from these patients, little is known about vitamin A deficiency in Germany. “Vitamin A deficiency occurs mainly in developing countries, where it is the main cause of blindness,” adds the scientist. Because one of the signs of vitamin A deficiency is night blindness, which can increase to complete blindness and is then no longer treatable.

There are also many other causes of night blindness, which are primarily age-related. The adaptive ability of the eye declines, for example as a result of cataracts, macular degeneration or retinopathia pigmentosa (hereditary disease). In any case, a doctor should always clarify if twilight vision deteriorates.

The other signs are a bit unspecific

Vitamin A deficiency is best compensated for naturally

Anyone who thinks they are undersupplied with vitamin A should simply use more of the corresponding fruits and vegetables. Overdosing is not possible because the body only converts as much provitamin as it needs and it still makes sense to store it.

Over-the-counter supplements are the next step. It is best to get advice from a doctor and trust products from Germany. “Over-the-counter products only contain provitamin A, so overdosing is difficult, and absorption in the intestine is reduced if there is sufficient quantity,” explains Andrea Henze in more detail.

Beware of vitamin A supplements

Vitamin A supplements, on the other hand, can be more problematic, and poisoning is possible if overdosed. In Germany such products are therefore not freely available, but in other countries they are. “Vitamin A supplements should only be used under medical supervision and not for self-medication,” warns Andrea Henze.

Vitamin A poisoning – the first signs

The excess supply of vitamin A does not slow down the body, as is usually the case with provitamin A. The excess vitamin A is mainly stored in the liver; if it becomes too much, the detoxification organ can no longer work. “It leads to intoxication,” says the scientist. In pregnant women, this can also have negative consequences for the embryo.

The signs of vitamin A hypervitaminosis:

If the oversupply lasts longer, it can even lead to death.

Incidentally, high doses of vitamin A supplements also led to the increase in lung cancer among smokers, previous studies warn.

What is certain is that over-the-counter supplements, which mainly contain beta-carotene, are usually harmless even if taken regularly. It is different with products that contain vitamin A, such as retinol. With them, intoxication is quite possible and can occur with a daily intake of 3 milligrams or more. By the way, retinol can also be found in many care products to keep the skin young and firm. “In this context, there is no need to fear overdosing, the substance does not pass from the skin into the bloodstream,” reassures the expert.

And hypervitaminosis A is hardly to be feared with food either. “Unless you eat liver several times a week,” warns Andrea Henze. Liver can contain over 30 milligrams per 100 grams of goods and thus exceeds the daily requirement by more than 30 times!

A historical anecdote shows how tragic this can end: More than 100 years ago, three researchers set out on an Antarctic expedition, Douglas Mawson, Belgrave Ninnis and Xavier Mertz. The expedition was not a lucky star, the men had to gradually eat the sled dogs in their distress in order not to starve to death. Mertz is said to have eaten the livers as well, subsequently complained of stomach pain, and his skin was partially peeling. After he fell into delirium, he passed away. Experts suspect that it was vitamin A poisoning from the dogs’ liver .

Therefore do not demonize the liver

Nobody knows for sure whether the story is really true. However, it is scientifically proven that hypervitaminosis A from natural foods is not to be feared, unless one eats a liver daily. Apart from that, the liver is an extremely valuable food from a nutritional point of view, contains vitamin A, iron, zinc , copper, vitamin B12 and folic acid, the supply of which is sometimes critical.

The most sensible recommendation: A lack of vitamin A can best be prevented with a balanced mixed diet, i.e. eat a lot of fruit and vegetables, whole grain and low-fat dairy products, sometimes a little fish or poultry.